Gyeltshen, who comes from a remote village in Trasiyangtse district in Bhutan, wanted to use this opportunity to become a better player, better person and send a message to his country that we also can be among the best.

“I feel I got a golden opportunity to represent Bhutan here. I am proud to be the first athlete from Bhutan to compete at a World Championships. It’s a great experience for us here meeting and seeing the best Para Athletes in the world. I also made some friends here from China, Fiji etc.

“Last time we were in Beijing Grand Prix, and it was a great learning experience there too. The Dubai 2019 event is much bigger; the atmosphere is great. I also met players from many unknown countries I have never heard of in my life,” Gyeltshen told Asian Paralympic Committee (APC) in Dubai.

Gyeltshen was joined by the shy Chimi Dema, also a shot putter in F40 category who competed on the final day (Nov. 15), and team manager Penjor Gyeltshen making it one of the smallest contingents in the Championships.

For both the athletes, the Dubai 2019 was their second international Para Athletics tournament and they believe they can inspire many others in Bhutan sharing their experience. Both achieved their personal best distance at the Championships despite finishing bottom of the results table.

“I surely want to participate in Tokyo 2020. There are so many champions here. It will be difficult to get a medal here but we should keep trying. And I believe that we should think ‘we can, I can’,” Gyeltshen added.

“I will be sharing this experience with others when I go back to Bhutan.”

Both the athletes are being supported by development wing of International Paralympic Committee (IPC), Agitos Foundation under their NPC Development Athletes Support Programme.

Team manager Penjor, who also serves as the coach, have been training and guiding the athletes since last August. “And I am very happy with their improvement.”

Infact in Dubai, Gyeltshen broke his personal best record with a distance of 6.29 metres, while Chimi also got her personal record of 4.51 metres at Dubai 2019 Championships. They had attained the Minimum Qualification Standard (MQS) for Dubai 2019 at the Beijing Grand Prix in May.

Penjor highlighted Dubai 2019 has been a “big opportunity” for new NPC like Bhutan and their players. “I have been taking my athletes around, showing them the level of competition. The athletes are already feeling nervous specially the girl athlete, Chimi. From here, they will learn to cope with pressure of international competitions. 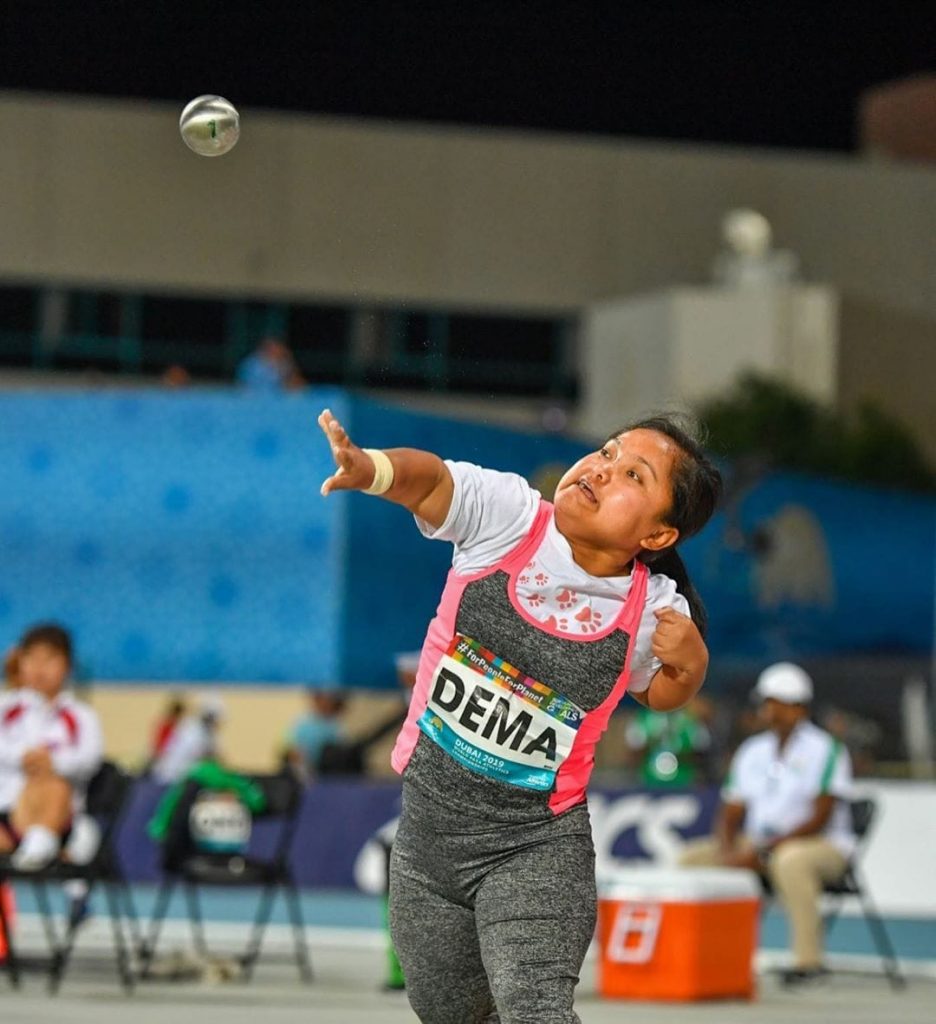 “It’s like a stepping stone for them. They are also learning from the elite athletes’ training level, their routines, even trained with them at the gym and on the field. Now they can go back and work on their technique and training regime. This will help them develop as better athlete.

“Our preparation for Tokyo 2020 has already started.”

Speaking on the Paralympic Movement and Para Athletics scene in Bhutan, he said they are “new baby” in this sport. NPC Bhutan was formed just two years back and their Para archer and shooter took part at the Indonesia 2018 Asian Para Games.

“Para Athletics in Bhutan is very new. We started last August with the support of Nippon Science University in Japan under the Nippon Sports University Expansion of Para Participation for Development countries (NEPP). I got trained there as a coach and started this project ‘Target Tokyo 2020’. After the third workshop, I went back home and looked for Para athletes specially with short-stature. Because its easy to qualify. We cannot think of wheelchair or amputee athletes now, as it will be expensive for new NPC to start with.

“Right now, we just have Gyeltshen and Chimi, but we have spotted many potential athletes in hospital (the recovering patients for whom there are hostels) and blind schools. Bhutan NPC is working with the Bhutan NOC closely to have more athletes in near future,” added the team manager acknowledging the support Japan Sisa Group and NSSU along with Sports from Tomorrow.

Sharing the plans of Bhutan Paralympic Committee in Para Athletics in the next few years, Penjor said: “More than having a champion, we want to go to the schools and educate the children about the Paralympic Movement and Para Athletics. After seeing the Worlds and GP, for us as new NPC it’s more of an educational programme.

“There is a long way to go for us. But in future, we will surely have a champion.”